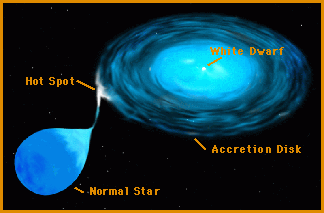 So one is a normal star, and the other is a white dwarf. What is a white dwarf? It is the final stage of a normal star before it fades to black. What was once a giant star becomes just a core (its core), where nuclear energy is generated. This happens when the red giant collapses at its center. White dwarfs are so small and hard to detect because they give out little light.

In cataclysmic variables, the white dwarf is the primary companion while the normal star is the secondary companion. Their orbital period can be 1 to 10 hours, because of the close distance with each other. And because of their closeness, the white dwarf’s enormous gravitational energy distorts the shape and sucks the material of the normal star. This process is called ‘accretion’, and the matter that is accreted, form what is called the ‘accretion disc’ around the white dwarf. Thus, making the cataclysmic variables look like a yoyo with a big handle