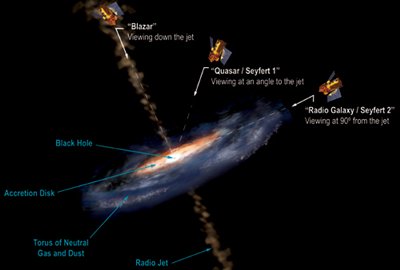 Modern sensing techniques have detected that in some galaxies, the center emits so much radiation that it produces more light that the rest of the galaxy. The high-activity center is called an active galactic nuclei or AGN. Galaxies hosting an AGN is named an active galaxy. The extreme emission of electromagnetic radiation of active galaxies is theorized to be brought about by the presence a super massive black hole at the center of the galaxy. The massive gravitational force of black holes creates an accretion disk that is the main source of extreme radiation activity. The accretion disc is heated so high that it emits enormous amounts of radiation.

An active galactic nucleus refers to the center of an active galaxy where there is intense radiation activity and not to the black hole only. AGN are usually just the size of our solar system or may be even smaller. They are the most luminous parts of the universe and the biggest sources of electromagnetic radiation. AGN plays a part in the discovering distant objects because they are very bright. Further, the light they produce is also used to study interstellar space through a technique called absorption spectroscopy. Studying how AGN evolve in time gives astronomers essential data to reconstruct models of the universe.