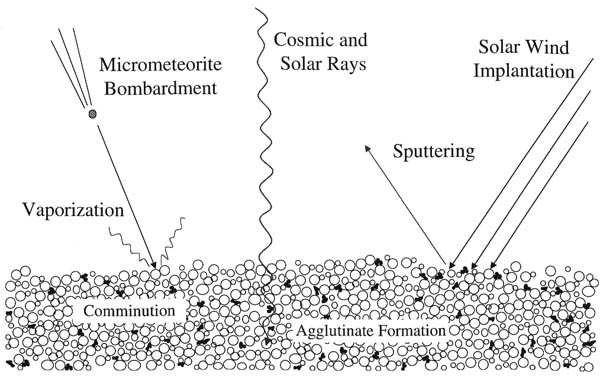 On earth, there is the process of weathering and erosion, well, the same applies in space, and the effects of these geographic occurrences are far heavier and much more different from what is happening here on earth.

Space Weathering is the general or the so-called “blanket” term used for the different surface processes that happens to celestial bodies when these are exposed to the different harsh and disastrous space environment.

Since the term space weathering is by nature a general term, it covers a lot of weathering processes which may include various means of rock disintegration like collisions and the like.

In collisions, these may include the following: galactic cosmic rays or solar cosmic rays. When these radioactive waves hit any celestial body, most likely airless bodies like the moon or mercury, it causes a lot of damage and these waves weather the rocks faster.

Another process is called irradiation, or indirect radiation simply put. It can also be Rock implantation, wherein rocks are being replaced or collided by new and young rock formations. It can also be the process of “sputtering” coming from the solar wind particles, in which case particles that are excreted by the sun are hitting the celestial bodies.

Lastly, it can also be the continuous flow of meteorites or micrometeorites, which originates from large asteroids from the asteroid belt.

This process is a vital to the universe. It affects both the physical and chemical aspects of the celestial bodies. It also provides a way to understand remotely observed data from different planets.