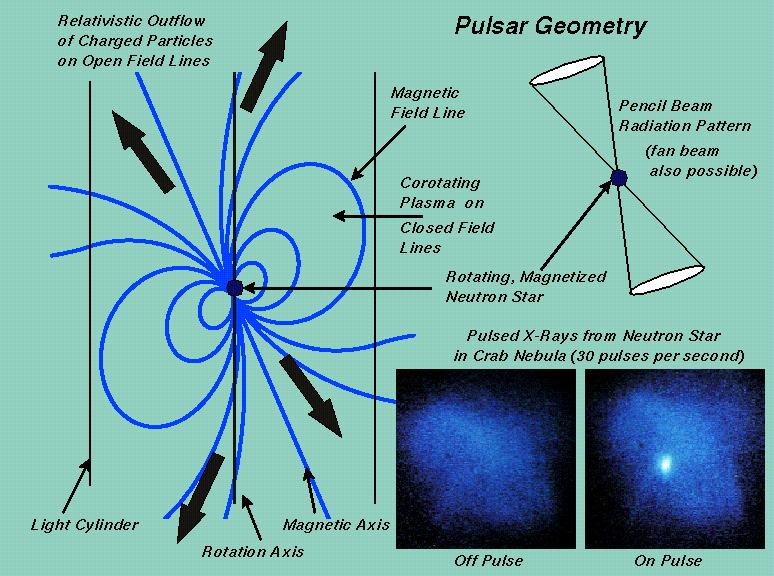 Pulsar is a contraction of two words, pulse and star (much like how quasar, meaning quasi-stellar object, was derived). By general definition, a pulsar is a small dense star (believed to be a neutron star) that emits mostly brief but intense bursts of electromagnetic radiation. The beam of radio wave produced is visible when pointed toward the Earth and the phenomenon is called lighthouse effect.

There are more than five hundred pulsars that have been identified in the Milky Way (the Earth’s galaxy). Before, the existence of pulsars was merely based on predictions with astronomers unsuccessful in finding one. It was not until the time of Jocelyn Bell and Antony Hewish that the first pulsar was identified and named PSR 1919+21.

Pulsars are actually detected from a neutron star’s powerful radio wave emissions. A neutron star is named as such since it is composed of minute neutrons. It is formed from the remnants of a supergiant, a star in the advanced stages of evolution. Because of the massiveness of a supergiant, it collapses under its own weight when no nuclear reaction can occurs because of the exhaustion of its nuclear fuel. This explosion of a supergiant is what is referred to as supernova.

When the supergiant collapses, material most distant to its center folds in. This coupled with the spinning of the star on its axis, causes the star to pick up rotational speed as the material moves in closer (This can be likened to a figure skater who gains more speed as she folds her hands closer to her body.). The result is a superdense flattened neutron star of about 20 km in diameter that spins about a hundred times per second.