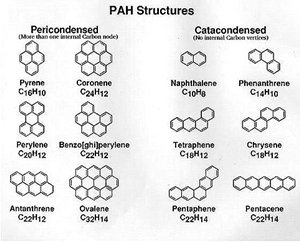 Polycyclic Aromatic Hydrocarbons (PAHs) are probably one of the most complicated names in chemistry. But despite the difficulty encountered with this term, these PAHs are common in our daily experience and are present as pollutants produced by the burning of fuels like oil and coal. In addition, PAHs can be found in our closets in the form of Napthalene balls and in foods that are cooked at high temperatures or grilled. But PAHs are not just found on Earth – recent researches show that this family of basic organic molecules are also found on interstellar objects like comets, meteorites and are being studied further to validate as a potential molecule to play a significant role in the earliest forms of life on Earth.

In the study of the cosmos, astronomers discovered that the processes that lead to the generation of dark clouds of dust, which are similar to sand on Earth because of the dominant presence of silicon, also produces Polycyclic Aromatic Hydrocarbons (PAHs). PAHs are the best clues that astronomers and astrophysicists use today to trace the formation of stars using the Spitzer Space Telescope. The glowing emissions of PAHs are used to light up the paths leading to dark clouds in nearby star-forming regions and help identify the entire scope of these structures. Through the vivid and precise determination of these structures, patterns of star formations and past galactic processes are recalled.

Polycyclic Aromatic Hydrocarbons (PAHs) were also found on a rock named ALH 84001, which was traced to be an object from Mars and a controversial proof that life existed on the red planet.