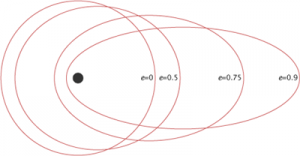 Planets have two motions in space. The first one is their rotation, where they spin on their axis. They also move around the sun, which is called their revolution. On their journey around the sun, they follow an imaginary track called the orbit.

In contrary to the popular notion, orbits are not perfect circles but are eccentric. Their paths are actually ellipses. In geometry, an ellipse is somewhat a flattened circle, where all the set of outer points are equidistant from two internal points: the foci.

The sun is actually one of the foci of all the planets? eccentric orbits. This means that there are times when a planet is closest to the sun (perihelion) and times when it is farthest from it (aphelion). As for the earth, the elliptical orbit and the earth?s tilt are significant factors of seasonal change.

Comments - No Responses to “Eccentric”