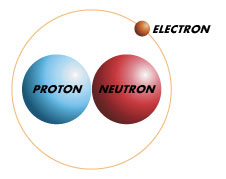 Deuterium is an isotope of hydrogen that has one proton and one neutron. As a result, deuterium is considered a heavy hydrogen. It is naturally occurring and sometimes exists as Deuterium gas. However, it is it is bonded with a hydrogen atom forming a gas called hydrogen deuteride. This naturally occurring gas is usually found wherever hydrogen is and exists in low fractions in all of hydrogen. Its existence as thus supports the Big bang theory of the universe’s origin.

The Big bang nucleo-synthesis states that the Big Bang was responsible for the formation of other isotopes of Hydrogen, particularly, the Deuterium. This theory also proposed that Helium isotopes and Lithium isotopes were formed as well.

Compared to Helium-4, which is very stable, Deuterium is only somewhat stable and thus, is easy to destroy. The stability of this particular Helium isotope meant that two Deuterium nuclei have a strong tendency to combine in order to make Helium-4. However, this conversion was cut short due to the cooling of the universe as a result of its expansion.

Scientists have attempted to produce deuterium for the past several years but their failure to do so have led them to propose that deuterium exists in abundance because the universe is not only made up of baryonic substance, but non-baryonic as well.

Comments - No Responses to “Deuterium”