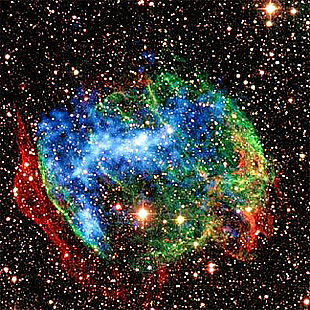 If you want to see violence in space, you may want start learning about blazars. A blazar is a compact energy source fueled by supermassive black holes. They are considered one of the most dangerous phenomena in space.

These extragalactic objects were first seen and discovered around 1972, thanks to the technology of A Very Long Baseline Interferometry. The name was coined by astronomer Ed Spiegel in 1978. Blazars are usually divided into two, the BL Lacertae objects (BL Lac) and the Optically Violent Variable (OVV) quasars. There are also a few intermediate blazars, which have the properties of both the BL Lac and the OVV.

Blazars emit high-energy plasma jets so fast that it’s almost at the speed of light. A blazar is actually a compact type of quasar, which is a galaxy far from the Milky Way. This means that a blazar is a member of active galaxy out in the universe. Blazars are characterized by their high speed and high energy. They are also extremely powerful. A blazar is usually an exciting topic for scientists when it comes to extragalactic astronomy.

Because they are fueled by black holes, a blazar lives on the energy of the objects like dust and stars that the supermassive black holes suck in. This explains the enormous amount of energy that they have.